Integration Testing is a level of the software testing process where individual units are combined and tested as a group.

The purpose of this level of testing is to expose faults in the interaction between integrated units.

Test drivers and test stubs are used to assist in Integration Testing.

Note: The definition of a unit is debatable and it could mean any of the following:

ANALOGY
During the process of manufacturing a ballpoint pen, the cap, the body, the tail and clip, the ink cartridge and the ballpoint are produced separately and unit tested separately. When two or more units are ready, they are assembled and Integration Testing is performed. For example, whether the cap fits into the body or not.
METHOD
Any of Black Box Testing, White Box Testing, and Gray Box Testing methods can be used. Normally, the method depends on your definition of ‘unit’.
TASKS

Bottom Up is an approach to Integration Testing where bottom level units are tested first and upper level units step by step after that. This approach is taken when bottom up development approach is followed. Test Drivers are needed to simulate higher level units which may not be available during the initial phases.

Sandwich/Hybrid is an approach to Integration Testing which is a combination of Top Down and Bottom Up approaches.

TIPS
Ensure that you have a proper Detail Design document where interactions between each unit are clearly defined. In fact, you will not be able to perform Integration Testing without this information.

Ensure that you have a robust Software Configuration Management system in place. Or else, you will have a tough time tracking the right version of each unit, especially if the number of units to be integrated is huge.

Make sure that each unit is first unit tested before you start Integration Testing.

component integration testing: Testing performed to expose defects in the interfaces and interaction between integrated components. 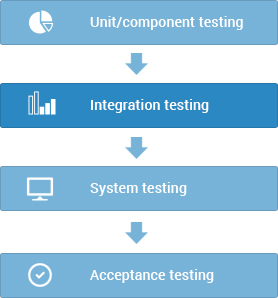