System Testing is a level of the software testing process where a complete, integrated system/software is tested.

The purpose of this test is to evaluate the system’s compliance with the specified requirements.

ANALOGY
During the process of manufacturing a ballpoint pen, the cap, the body, the tail, the ink cartridge, and the ballpoint are produced separately and unit tested separately. When two or more units are ready, they are assembled and Integration Testing is performed. When the complete pen is integrated, System Testing is performed.
METHOD
Usually, Black Box Testing method is used.
TASKS

When is it performed?
System Testing is performed after Integration Testing and before Acceptance Testing.
Who performs it?
Normally, independent Testers perform System Testing.
Definition by ISTQB
system testing: The process of testing an integrated system to verify that it meets specified
requirements. 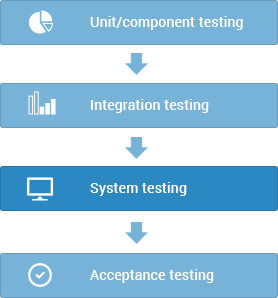